Margreet has fifteen years of experience working in the public sector internationally, including for the OECD, the New Zealand Ministries for the Environment, Social Development, Education, and Finance and the Dutch Ministry of Health & Wellbeing.

Australian Treasurer Jim Chalmers is joining the global movement towards a wellbeing economy with his new budget, announced last month that aims to weave wellbeing indicators into government budget decision-making. While traditionally, government budget analysis has focused on a limited set of economic outcomes like GDP, inflation and unemployment, the new Australian budget will base its priorities on a more comprehensive analysis of societal wellbeing outcomes. In the aftermath of raging bushfires, extreme floods and COVID-19, the new Australian Wellbeing Budget recognises that there is more to life than economic growth. Instead, scanning societal wellbeing evidence across social, environmental and economic outcomes paints a much more realistic picture for deciding on government priorities. One that better reflects people’s lived experiences.

In its move towards wellbeing budgeting, Australia can build on its extensive experience in measuring societal wellbeing, such as its pioneering work on Measures of Australia’s Progress, the wellbeing framework developed by the Australian Treasury and the more recent work by the ACT government and other Australian states. Australia is also not alone on this journey. Internationally, a growing number of governments are developing wellbeing indicator frameworks to inform and shape better public policy (Figure 1). 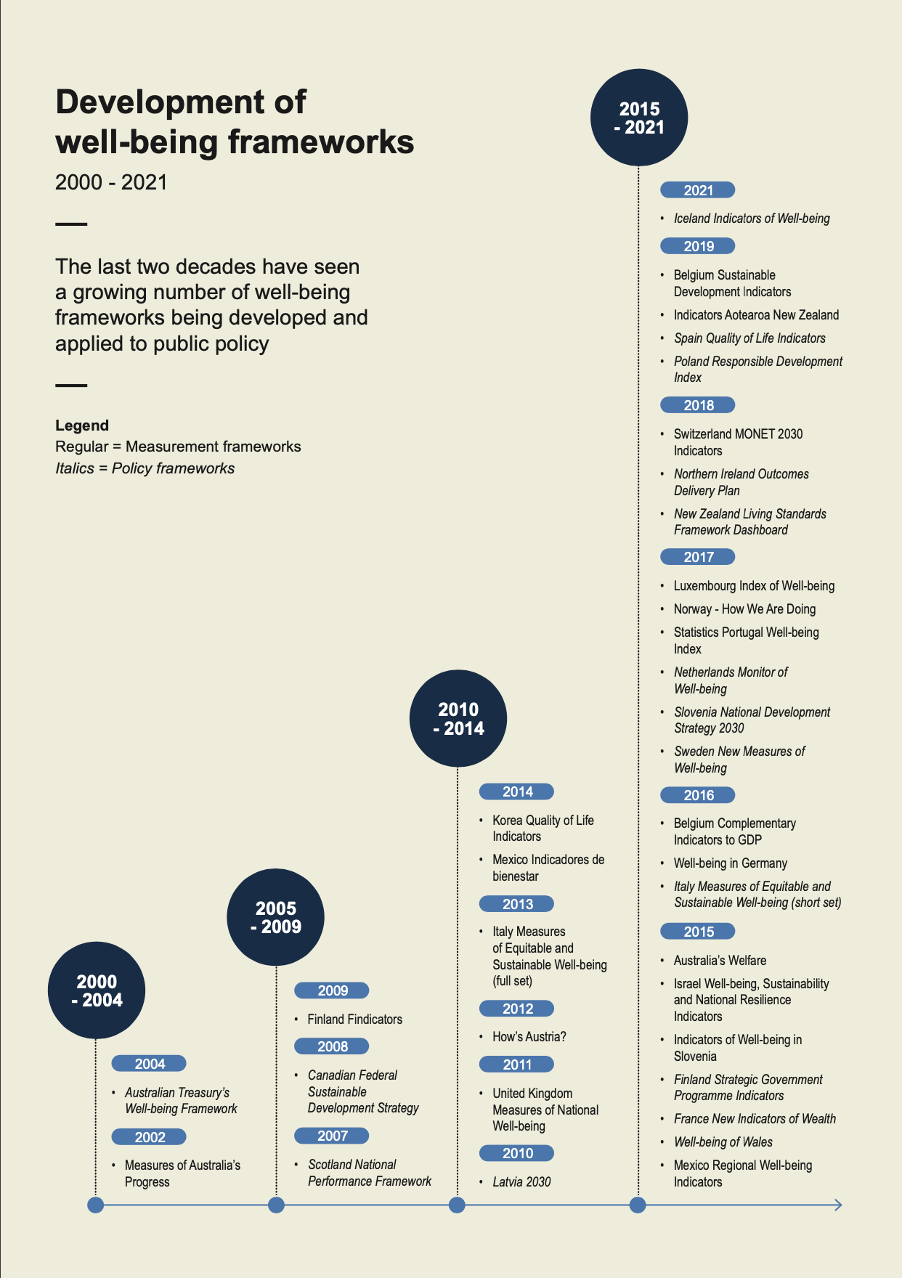 Putting wellbeing measures at the heart of the budget process

However, measurement alone is not enough. The government budget process is a critical lever to more strongly link wellbeing evidence to government spending and policy prioritization. Governments around the world, in countries like New Zealand, Scotland, Bhutan, Canada, Ireland, Iceland, and Wales are working towards Wellbeing Budget approaches that base budget decisions on a more comprehensive set of evidence about the outcomes that ultimately matter to people, including not just the health of finances and the economy, but also of our natural environments, people and communities.

Critics in Australia have argued that wellbeing budgeting is nothing more than a way to “elevate Labour spending priorities ” or “another excuse for higher taxes and bigger deficits”. The political origins of the wellbeing agenda is however neither ‘left’ or ‘right’. Internationally, calls for a wellbeing policy approach have come from parties across the political spectrum, including the Conservative Party in the UK, the Christen-Democrats in Germany, the Liberal Party of Canada, and the Scottish National Party. Wellbeing Budgeting is also as much about cutting spending on those things that detract from our societal wellbeing as it is about spending more on the things that make our lives better.

Others might argue that wellbeing has nothing to do with the role of the Treasury, who should only be concerned with economic and fiscal outcomes. Ironically, it is exactly this confusion between means and ends that a wellbeing approach is trying to address. While Australia has praised itself for more than 25 years of continuous growth, the severe environmental, inequality, health, housing and cost-of-living crises it is facing are telling us that growth does not equal true progress. By targeting wellbeing more directly – and explicitly building wellbeing considerations into policy upstream – we can create economic systems that serve societal wellbeing, rather than continuing to sacrifice the wellbeing of people and the planet for the sake of the economy.

The start of a journey rather than the end

Nonetheless, wellbeing budgets mark the start of a journey towards better societal wellbeing, rather than the finish point. New government budgets announced each year are small compared with baseline funding that rolls on from year to year (equalling about 4% of core Crown expenditure). To have real impact, wellbeing analysis needs to be integrated throughout all of government decision-making.

There is also a steep learning curve. Working towards wellbeing asks for shared understandings across government of what societal wellbeing means and how different wellbeing outcomes interrelate. It requires policy makers to understand the system rather than its component parts and to focus on the root causes of our crises rather than firefighting the symptoms of a broken system. Moreover, as improving wellbeing is ultimately a whole-of-society affair, it calls on governments to reconnect with the people they serve.

Then, there is accountability. Rather than a new narrative or objective, ‘wellbeing’ needs to become a new way of working. Inspiration here can be drawn from the Wales Wellbeing of Future Generations Act, which goes beyond specifying wellbeing goals to identify the ways of working to arrive at these outcomes. An independent Commissioner supports the Welsh government on this journey and holds agencies to account if needed.

Last but not least, wellbeing budgets can only be successful if the frameworks that underpin them reflect the diversity of perspectives in society on what wellbeing means. A successful Australian Wellbeing Budget must therefore recognise the importance of First Nations views on wellbeing in shaping both budget decisions and policy approaches.

Treasuring what matters most – and spending government budgets accordingly – is an essential step in moving towards wellbeing economies. The WEAll Policy Design Guide, developed by the Wellbeing Economy Alliance, provides valuable guidance for those wanting to join Australia and many others on this vital journey towards wellbeing for all on a healthy planet.

In turbulent times, our leaders must address the systemic causes driving our...