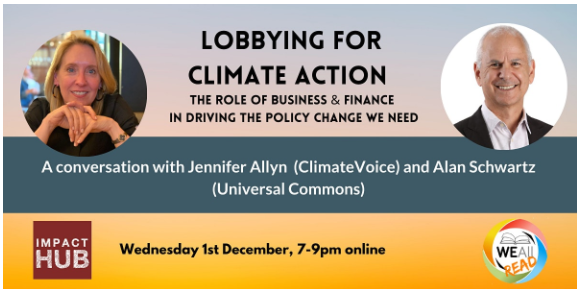 How can and should businesses and finance support social movements to drive change?

From Extinction Rebellion to Bill Gates, the support for a proactive government  for climate action is clear. But the role of business and finance in making this happen is less obvious: can the ‘rule-taking’ private sector legitimately take on a ‘rule-maker’ role through lobbying and advocacy without undermining democracy?

Joining us in the discussion was Jennifer Allyn, Director of Programs and Campaigns at ClimateVoice, an organisation whose mission is to mobilise the workforce to urge companies to go ‘all in’ on climate, both in business practices and policy advocacy. And Alan Schwartz, founder and funder of the Universal Commons project. (Also co-author of ‘Why Sustainable Investment Means Investing in Advocacy‘).

Anna introduced the key ideas, visible on the mural below and viewable here.

Outlined by Alan was the key role he thinks businesses could and should take to act positively towards changing policies that affect the climate crisis:

Jennifer introduced Climate Voice and the philosophy of the organisation that revolves around workers acting as key pressure points in businesses:

Member questions included ‘how can businesses act together with civil society, and be involved in advocacy in countries where authoritarian governments or political instability limit the influence you can have?’ and ‘how can recent graduates be activists in workspaces where the power imbalance is so strong?’

The key conclusion was that business can and should play more of a positive role in politics whether pushed from below by workers, or by C-Suite decisions that make businesses more actively ‘political’. As Jennifer put it, the absence of climate policies was decades’ worth of work by the fossil fuel industry. So lobbying for positive climate action should be something businesses get behind. After all, we know lobbying works.

Watch the session on YouTube here (for an overview of the core ideas, start at 3:15, for the start of the discussion with the speakers, at 41:50).

Join us in January as we talk to bestselling author Azeem Azhar for an in person session in London’s Impact Hub Kings Cross. 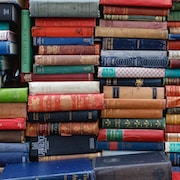 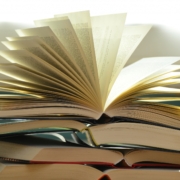 Reading your way to a wellbeing economy: 20 recommended books
0 replies

Well Being by Judy Janoo

Join the team of WEAll Youth!
Scroll to top