On November 20, Rutger Hoekstra introduced the topic of his new paper “Measuring the Wellbeing Economy: Going Beyond GDP.”

During the 60 minute webinar, Rutger outlined the three major to-dos needed  to move this agenda forward.

You can watch the recap of the event below

He is currently working with the United Nations University (UNU) exactly on these topics. The working title of the project is the WiSE Transition (Wellbeing, Sustainability and Equity). He emphasised that he doesn’t want to create a new index or dashboard. What he’s wanting to do is harmonise existing databases and also put more emphasis on the global south perspective and involvement.

If you’re interested in getting involved in WiSE, please fill out this form.The survey will close December 4.

During the event, a number of questions were asked. We’ve summarised  them below.

We hope to keep you apprised as Rutger’s WiSE working group and work with the UNU continues.

Q: A “beyond-GDP” measure makes so much sense! From your experience, what are the top three barriers / inhibitors to its adaption by governments?

A: 1) Political leadership 2) Too much heterogeneity 3) Lack of Policy Tools

Q: How do you view the “buen vivir” alternative narrative in some Latin American countries?

A: Sorry I don’t really know enough about it. But in my research I find far more commonalities than differences between the various concepts. Let’s focus on commonalities.

Q: Is there space for co-creation and engagement in moving this agenda forward? When we talk about narratives, I suppose it really connects with the lived experience of people.

A: Yes, by definition the harmonisation we discussed will need to be co-created (and an interdisciplinary process).

Q: What do you think of the work of professor Nicky Pouw who takes the SAM (social accounting matrix) and extends the tool to a Wellbeing Economy Matrix. (Is this the kind of tooling you are looking for?)

A: Sorry, I am not aware of this. Without further knowledge I would say: I like the idea of linking it to the SAM (an accounting framework). I wouldn’t call this a policy tool yet, that would need using the SAM to build a model upon which a decision can be made.

Q: How are you integrating with Ecological Economics principles and practices?  Is there a need for an ecological worldview that changes our perspective of how economy and life fits in the planet?

A: Yes, we need to reframe the idea that the economy is the central focal system. The planet is the most important system, society next, and the economy is only a sub-system of society.

Q: Because all UN member states have signed on to the SDGs and (at least theoretically) have added SDG-based indicators to their “system of accounts,” do you think that an SDG-based dashboard would have the best chance of becoming a “Beyond-GDP” approach?

A: SDGs are great in terms of harmonisation of indicators, but the link to policy is still a challenge. In reality, the various targets are interrelated and so we need a system (accounting framework) which is capable of showing the interlinkages (trade–offs and win-wins) between the targets so that effective policies can be developed. P.S. the SDGs run out in 2030 – is that the end of Wellbeing Economics?

A: It will probably take a little longer to assess its success. Plus, only 4% of the budget was assigned to specific wellbeing policy, so we need to be realistic about how radical a change we are expecting.

Q: Global Progress Indicator will show politicians how over-inflated their GDP numbers are, there is strong disincentive to use it. Should one principle of the new metric be that it also highlights what governments are doing right? (Positive progress)

A: Yes, that and it also helps to frame a future where creating a better world is not only a sacrifice [but also has benefits] (e.g. less consumption, but more leisure time).

Q: Within the SDGs, there is still a goal on Economic Growth (no.8) mostly measured in GDP . What’s your view on De-Growth?

A: I think GDP growth makes sense for very poor people (half the world population lives on less than 5 euros a day). As Kate Raworth says, we should be “agnostic” to growth. I don’t really care if GDP grows or declines as long as wellbeing, sustainability and equity are increasing.

Q: We basically measure everything. If the values are “good”, then you get a label that says that (e.g. eco-labels). It becomes more about getting the values right rather than the reason why we are making those values, with companies just working to take the right boxes to get the label. How can we avoid wellbeing measurements following the same path?

A: Metrics are always flawed if they become a target. I don’t really know of a solution to this, but I do think that it is more important for companies to internalise the values of the wellbeing economy. Just adopting the metrics, but not the underlying values, will not be as effective.

Q: Do any of the indices include a measurement of hate crime and how minority groups are embraced or otherwise within a country?

A: There are dashboards looking at discrimination and inequalities, but not as extensively as your question seems to wish for. 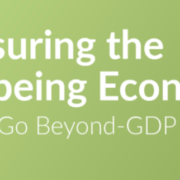 Measuring the Wellbeing Economy: How to Move Beyond GDP

Launching 36×36 For a Femxle Revolution