A little over a year ago, in March 2021, WEAll published our Policy Design Guide. This Guide was co-created with over 70 WEAll members, and aims to support visionary policy makers to build just and sustainable economies for people and the planet.

Since then, WEAll hubs in California, Canada, New Zealand and Scotland are working with community partners and local or city governments to bring the Wellbeing Economy Policy Design process to life.

You can read more about the background of these pilot projects in our introductory blog posted in December 2021.

Now, at the halfway point of their projects, these four WEAll hubs are focused on co-creating locally rooted wellbeing visions with their communities, which will go on to inform policy recommendations.

Why developing a wellbeing vision matters

Wellbeing Economy policy design begins with setting a different vision of progress. For decades, we have used indicators such as wealth and GDP growth to assess societal progress.

This has led us to focus on fostering economic growth, regardless of whether or not it leads to improvements in collective wellbeing. Many governments are now flipping the script and developing more holistic and longer-term visions of progress, so that collective wellbeing becomes the ultimate measure of economic success. These visions help us to recognise wealth as one driver of wellbeing, alongside a wide variety of other social, cultural and environmental factors.

The challenge, of course, is that viewing wealth as the main–and often only–indicator of progress has become embedded in many of our cultures, influencing the way we view our own capacities, relationships, and purpose. Changing this requires expanding our understanding of the economy, its relationship to social and ecological wellbeing, and our notion of progress to encompass a wide variety of factors that determine the quality of our lives on this planet. As such, a Wellbeing Vision is not something that can be imposed; it must come from  within communities and will vary according to each of their needs, desires and contexts. Co-creating Wellbeing Visions requires engagement with communities to understand what matters for their wellbeing, now and for generations to come.

The Wellbeing Economy Policy Design Guide breaks the process of developing a Wellbeing Vision into three steps for policymakers and communities to work through together:

1) Understanding what matters for wellbeing

2) Crafting and communicating the Wellbeing Vision

The purpose of this process is to develop a medium- to long-term Wellbeing Vision towards which the society and government will work.

The visioning work of the hubs so far

The activities were innovative, designed to be fun and engaging for the children and young people taking part as well as to draw out their hopes for a thriving future in Letham. The different techniques used were:

The project team has also established the Love Letham Commission, which includes young people, local leaders and community representatives. At their first meeting in April, they also took part in visioning exercises to connect with what a Wellbeing Economy could mean for Letham. Through the collaboration with local primary schools, a parallel Children’s Commission is also up and running. These two Commissions will analyse the data from the visioning exercises and develop it into a shared vision in the coming weeks.

“It’s great to have a lot of data that’s not in the same homogeneous form. We’re going to use the Mosaic Approach to bring it all together. At the first Commission meeting, we took some of the data to them and asked what was striking them. There were lots of really interesting observations about what people need. What children want is to be able to have the things that they need in the place that they’re in.” 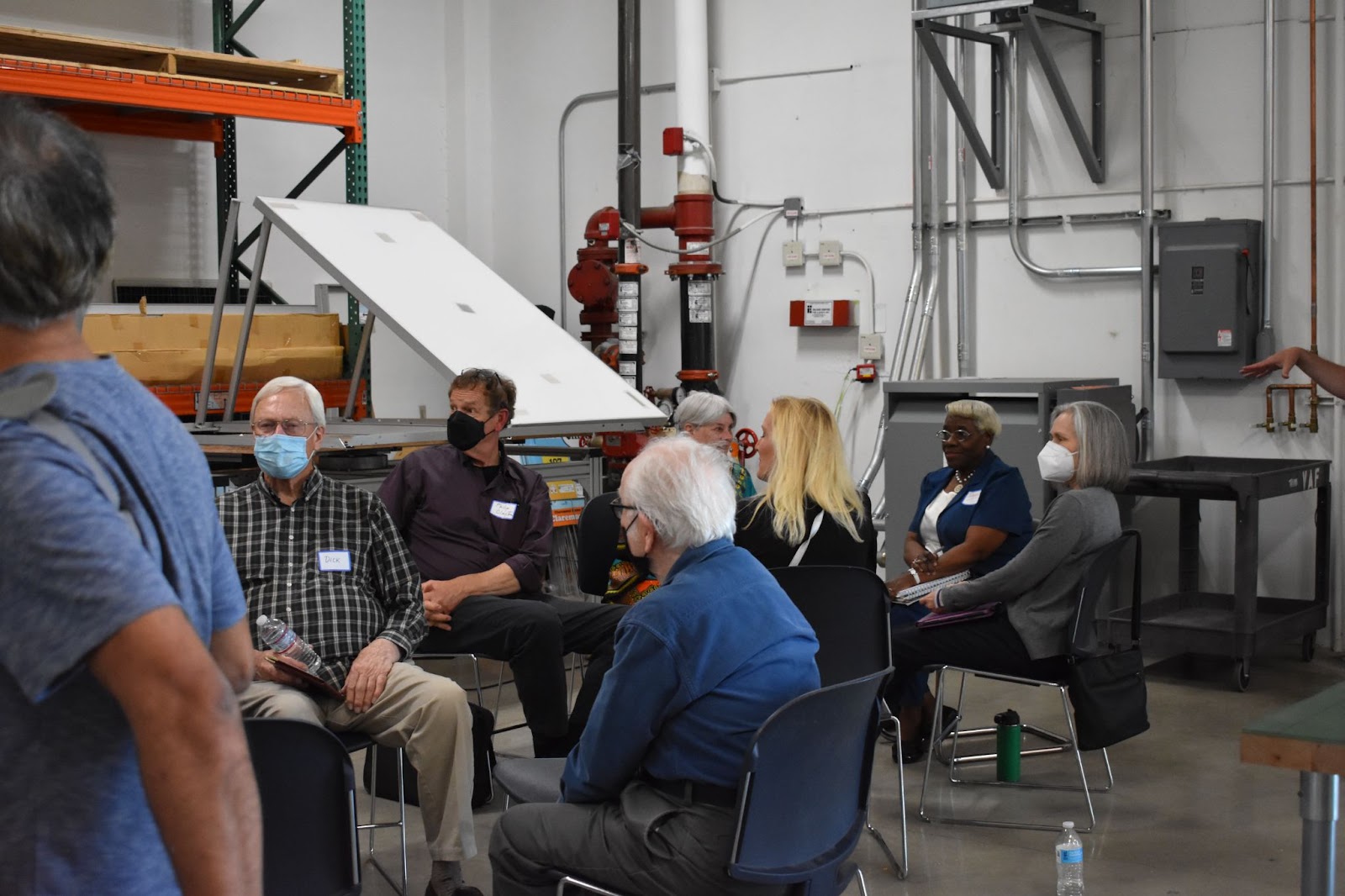 With a core group that includes WEAll California hub members, representatives of the Latino Latina Roundtable and elected officials, the California team has developed and honed its approach to visioning that it will now go on to use with the wider community in Pomona.

They developed a workshop that can be used online or in person. Ahead of the workshop, participants were asked to name general areas that are a priority for achieving wellbeing in Pomona.

The pilot team distilled those into five priority areas. During the meeting, the core group was put in pairs and each pair came up with as many wellbeing priorities as they could for that area. They were explicitly asked not to worry about ranking or prioritising, just to capture everything they could think of.

Next, different sets of pairs looked at these long lists and ranked them in an unusual way.

Jeremy Fackenthal, EcoCiv and WEAll California co-founder, explains: “We wanted to genuinely assume that everything that was listed in the previous session was important or valuable. So instead, we ranked in terms of time and priorities. What could be accomplished? What should be focused on within the next 12 months? What should be prioritised over the next three years? Over the next five years? And then beyond?

“We really want to start to do this with larger and larger circles. It shouldn’t just be our core group naming what we say are the priorities. We’re be repeating the process with a number of different groups from May onwards, starting with community groups and activists working on issues related to wellbeing and ideally more City Council members. Then over the summer, the idea is to build toward larger, almost citywide events, but to do that by starting to reach out to groups of maybe 12 or 15 people at a time using some existing networks.”

The pilot team working in Toronto is also taking the approach of starting with a core group for visioning work, and will soon progress to work with City Government officials and wider groups of Toronto residents.

Not only is the core group going through the visioning process, they are also co-creating it.

Tara Campbell, David Suzuki Foundation (delivering the Toronto project on behalf of WEAll Can) has put a lot of focus on the people who make up that core group, taking care to invite them into this process as unique individuals rather than representatives of an organisation or group. She explains:

“These are people who are community organisers, designers, artists, academics: people who have deep relationships in Toronto. They have networks that they could invite into the larger process, and who are also quite invested. I don’t know if any of them would have ever even heard the term Wellbeing Economy before. But I would say that their work falls within it.”

Attention is also being paid to the types of spaces people are being invited into. The core group is initially meeting outdoors, gathering around fires to share their visions for a thriving future in Toronto. The group has a mood board and a shared playlist, taking a multi-sensory approach to wellbeing visioning. They are currently shaping the broader visioning process which City officials and wider groups of residents will be invited into over the course of the summer.

The WEAll team in Aotearoa New Zealand are concentrating on local government for their study project. Local governments are required by statute “to promote the social, economic, environmental, and cultural well-being of communities in the present and for the future”. This requirement was first introduced in 2002, and so there is a good history of New Zealand initiatives in the Wellbeing Economy space.

Some local governments, for example, have worked with community partners to create formal frameworks for monitoring the wellbeing of their communities. The Canterbury Wellbeing Index is a good example. This includes a wellbeing framework named He Tohu Ora, which is based on Indigenous values developed in liaison with the local Māori tribe, Ngāi Tahu. Another is at the top of the South Island. Te Tauihu is an intergenerational wellbeing strategy inspired by the vision to be good ancestors, this was developed in conjunction with the local government’s economic development agency.

Against that background, the WEAll team are working with a community wealth building project in Porirua, which is a city within commuting distance of the country’s capital city of Wellington. The project has identified three opportunities for developing a local Wellbeing Economy centred on housing, food and digital. Project leaders are exploring how to develop this potential. The WEAll team is walking alongside this initiative, using the Wellbeing Economy Policy Design Guide to engage with the project on turning vision into policy.

Paul Dalziel, Deputy Director of the AERU at Lincoln University comments: “This project is a practical illustration of how a wellbeing lens can help communities build wealth in a way that respects the natural environment and expands the capabilities of people to flourish.

Justin Connolly, Director of Deliberate, adds: “Porirua is a good example of how participatory projects can redesign systems to better promote community wellbeing.”

Paul and Justin are leading the WEAll contributions to this project.

Are you interested in finding out more about the pilot projects, or using the Policy Design Guide to inform your own work? Get in touch with me at lisa@weall.org.

This is the moment to go Beyond GDP