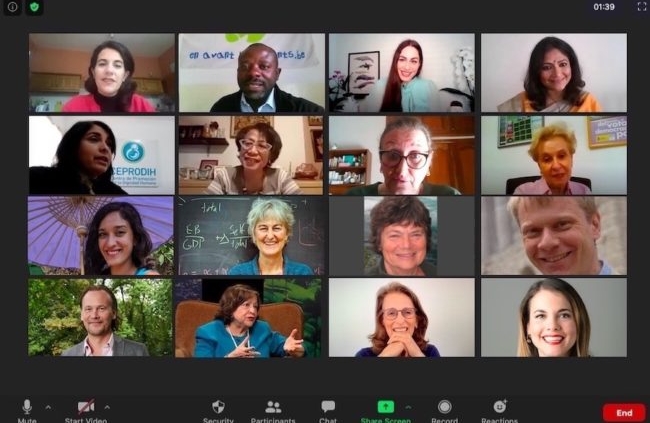 The webinar was hosted by Make Mothers Matter (MMM), a network of 40 grassroots organisations working in 30 countries to support and empower mothers and their families, and to advance the human rights of women and children.

Specifically, MMM advocates for the recognition of mothers as change-makers and spending on Care and education as essential investments and not expenses.

Amanda’s talk outlined the first concrete steps taken by a few women-led countries to promote the emergence of a Wellbeing Economy, and how they support Care and gender equality. Watch the “Care and Education – Cornerstones of Sustainable and Just Economies” webinar here.

Inspired by the webinar, Beverley Smith writes about her experiences as an advocate in Canada for the recognition of unpaid care as an essential economic activity, since 1976:

Statistics Canada admitted that unpaid labor, if counted, would account for one third of the GDP. But, GDP does not account for unpaid labor for childcare – which saves governments billions from not having to fund public daycare.

So, I was pleased to learn of alternatives to GDP on the webinar. The webinar showed we are making big strides. But there are still hurdles.

A ‘working mother’ implies there are non-working mothers. Though we say ‘housework’ and being in ‘labor’, a person there is dubbed inactive. Economist Marilyn Waring said,

“When I see a woman holding her child, I know I am watching a woman at work”.

She was ground-breaking and right. Still, terms like ‘work’, ‘labor force’ , and ‘productivity’ only count paid work. And because childcare is defined as paid care, government funding for it goes only to daycares.

Viewing Care as a Privilege or a Burden

The myth that women at home are rich, led to higher taxes on the single income household, as costs of childcare were only claimable if cash was paid to a third party. This was despite the evidence from the Canadian Council on Social Development that most families with a parent at home live near the poverty line.

When parents pointed out their role was not leisure and involved sleepless nights and intense days, traditional economics flipped the view. Now, care of children was a burden – and the answer was for men to share the load so that women could do useful paid work. These moves did not value caregiving.

The Right to Choose

Is care a personal decision or a societal one?

In the current economic paradigm, we are told that people ‘need‘ daycare and have no other choice: mothers hire caregivers so they can return to paid jobs, which creates two ‘jobs’ in the economy – a success story.

Nobody asks what the parent wants though, and nobody asks the child.

Luckily, it is us, who set up the economy. We could fund care itself to give full choice to parents. We’re not there yet.

We are confronting traditional economics that only counts paid work. No wonder this is hard.

And sigh… most of this lobbying to get unpaid work valued, will be done by unpaid work.

You can contact Beverly for a the timeline of international caregiving, a summary of 100 years of women’s rights advocacy or a study on the state of children’s rights, globally.

The Myth of Green Growth
Scroll to top