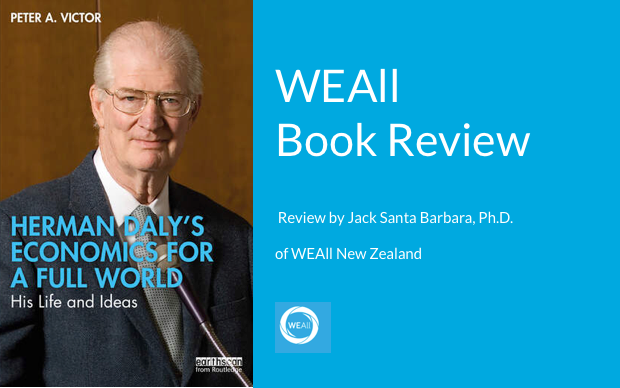 Everyone in the Wellbeing Economy movement has an intellectual indebtedness to the work of Herman Daly, often cited as the Father of Ecological Economics. Peter A. Victor’s biography of Professor Daly celebrates the man and his ideas, and provides an excellent and handy summary of Daly’s transformative ideas.

Daly’s economic writing spans six decades and provides a rigorous conceptual framework for a new model of economic thought. One of the main features of Daly’s work is that he reformulates economic thought in terms of the natural sciences and ethical theory. This is in sharp contrast to the dominant economic model which is based on a series of assumptions, almost all of which can be demonstrated to be false, and which ignores the natural sciences and ethics almost entirely.

Interestingly, Daly began his career as a classical economist, obtaining a PhD in economics from Vanderbilt University in the mid 1960 ‘s . His decision to study undergraduate economics arose from his broad interests in both science and the humanities, and he saw economics as a social science that would allow him to combine these interests. He quickly came to realize that mainstream neoclassical economics had no scientific basis, and also ignored human values beyond individual self-interest. He came to realize that “neoclassical economics has both feet in the air: disconnected from the Earth and disconnected from Ethics,” according to Victor.

His mission in life came to be connecting the two – science and ethics – in reformulating economic thought – concepts that are central to the Wellbeing Economy. In capturing Daly’s intellectual journey, Victor gives us some helpful insights about how it is possible to question basic mainstream assumptions and move beyond their limitations. Whether or not it was Victor’s intent, he has provided a bit of a case study in how to change a dominant and dangerous paradigm- useful lessons for serious activists.

Peter Victor does a very nice job of connecting seemingly disparate events in Herman’s early life with his later theoretical contributions; Herman’s experience of polio as a youth leading to his acceptance of limits, his exposure to poverty during a teenage trip to Mexico, and religious upbringing, leading to his lifelong concern for social justice.

Even more impressively, Victor identifies Daly’s major conceptual contributions and summarizes their evolution in a very succinct and digestible form. The focus of the book is clearly on Daly’s ideas, but we also learn enough about Herman as a person to justify his reputation as “a warm, mild-mannered, strong –willed man willing to ask awkward questions.”

There are many concepts introduced and developed by Daly that are relevant to a Wellbeing Economy which are not always explicitly linked to Daly’s works. This is unfortunate, as Daly’s rigorous thinking and ethical perspective provides strong theoretical foundations for many alternative approaches to the current neoclassical economic paradigm. Anyone involved in the Wellbeing Economy would be well advised to become familiar with Daly’s work. His theoretical rigour and clarity of thinking will strengthen the kinds of activism that will make real change. Engaging in Wellbeing work without a background in Daly’s ideas is a bit like crossing a busy motorway with horse blinkers on.

Peter Victor has made it easy to access Daly’s theories about how an economy should function to achieve both ecological and social goals, as well as economic ones. In addition to covering some aspects of Herman’s early life and the major influences on his approach to economics, most of the book reviews the scientific and moral underpinnings of ecological economics. There are chapters on Philosophy, ethics and religion; Economics as a life science; Scale, distribution and allocation; Measuring the economy; What’s wrong with economic growth; Steady state economics (including attacks from both classical and heterodox thinkers and rebuttals); Population, migration and immigration; Money and banking; Globalization, internationalization and free trade.

Daly’s thinking about these issues are covered in his numerous books and papers and develop over time. Victor provides a great service in bringing these concepts into well-organized chapters, showing how Daly’s interest in the history of economic thought builds on the work of others, and adds his own contributions. Victor also helpfully elucidates where Daly’s work ends and what additional contributions are needed.

Heterodox critiques of Daly’s work have also been made – for example, from both Marxist and degrowth economists. Some degrowth thinkers have attacked Daly for relying on markets for efficient allocation of resources, for example. Victor clearly points out how these critiques totally miss Daly’s assertion that efficient market allocation can only occur if both scale and distribution are first addressed. Daly insists that there is an ordering to policy priorities: first ecological scale must be addressed; the physical size of the economy must remain within planetary boundaries. There are limits to economic growth in terms of material throughput. It is only when this ecological limit has been settled that the second policy priority can be addressed – distribution. How can the pie be divided fairly, rather than how can we keep growing the pie so that everyone can have a bigger piece? Once these priorities have been assured, only then the market can become an efficient means of allocating resources. This is a very different role for the market compared to its central role in our current system.

Daly correctly points out that the neoclassical economic insistence on continuous economic growth is not only destructive to ecological systems, but is also an excuse for avoiding the issue of fair distribution. The market on its own cannot adequately address either scale or fair distribution.

Daly’s insistence on limiting economic growth in terms of material throughput is certainly counter to mainstream economics. Daly points out how increasing material throughput (producing more things for people to use) might have made sense in an “empty world,” but is destructive and dangerous in a “full world” of people and human artefacts. Daly’s interest in the history of economic thought helps us understand how we got here, and where we need to go next.

One of the many strengths of Daly’s theories is that he not only provides a deep critique of mainstream economics, and puts it in a helpful historical perspective, but he also presents a framework for evolving economics to the next level. A steady state economy is Daly’s answer to a full world economy, and again, Victor does a great job of summarizing the main features of a steady state economy and the policy instruments that could make it work. Victor has himself contributed to this evolution by demonstrating that a complex economy such as Canada’s can be managed with the right policies, but without growth.

The steady state economy is often misunderstood as a dead end without continued economic growth. But Daly is clear that while material throughput must be brought within planetary boundaries (a quantitative limit), there is no end to the qualitative improvements that can be made in human wellbeing, some of which can be provided by economic activity. A steady state economy can be dynamic and contribute to human wellbeing in many meaningful ways.

Daly’s unorthodox ideas have resulted in his being rejected by mainstream economists, and sometimes personally attacked. Even his family has felt the abuse sometimes directed at him. Nevertheless, he has received many international awards for his thinking and contributions to many movements, some of which may be unaware of the source of their ideas. Daly’s ideas have received widespread support by groups interested in alternative economic systems. His textbook on Ecological Economics with Josh Farley is currently used in several universities around the world, and has been translated into several languages (including Chinese) to further broaden his influence.

Despite active mainstream resistance and rejection of Daly’s work, his ideas about economics for a full world have had widespread impacts. We are seeing more questions about the merits of continued economic growth in the media, ecological overshoot is also mentioned more often, and even the idea of a steady state economy is being explicitly attacked by mainstream economists – a sure sign of increased recognition.

One of the organizations focusing on the steady state idea is the Center for the Advancement of a Steady State Economy (CASSE), a Washington D.C. based NGO, founded and led by Brian Czech, demonstrating the same tenacity for the urgent promotion of a new economic paradigm that Daly models so well.

Daly’s ideas are critically important to a Wellbeing Economy. His theories, his historical perspectives, his rigorous arguments, his responses to critiques of his ideas, as well as his clear moral positioning, are powerful gems to be learned and used in the struggle for an ecologically sustainable and morally just society. Peter Victor has done both Daly and the rest of us a major service in providing an excellent summary of Daly’s ideas in a well written reference book for activists’ libraries.

Herman Daly’s Economics for a Full World: His Life and Ideas is available to purchase here.

WEAll Talk: Is there a spiritual side to economics?