This morning a few of us from the WEAll family were sitting in the house that Adam Smith used to live in.

We were there to see the kick off of the first Wellbeing Economy Governments (WEGo) policy lab: Scotland, Iceland and New Zealand coming together to collaborate on wellbeing economy policies.

WEGo is about governments rolling up their sleeves, linking arms, and walking together down a path that sees national success as being defined by the quality of life of citizens rather than the growth rate of a country’s GDP. As the Chief Economist of the Scottish Government said, WEGo is about driving the wellbeing agenda in economic, social, and environmental policy making.

WEAll has been supporting (and sometimes agitating) for this project for many years (even before WEAll was officially formed).

So, sitting back with a coffee after this morning, after these years, and reflecting on the potential of this little project is a nice moment. 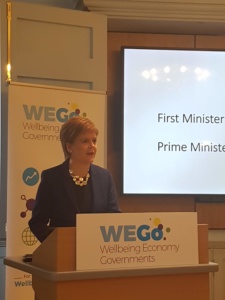 We heard the First Minister of Scotland quote Adam Smith and declare that a nation’s success shouldn’t be measured by its gold or silver: that growth is only of value if it makes people’s lives better – it is not an end in itself. 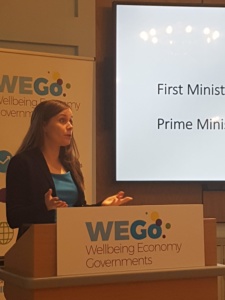 We heard the Prime Minister of Iceland – Katrin Jakobsdottir – say she is personally committed to collaborating with other governments on this agenda and that Iceland is excited by the WEGo project because it is “time to think differently about growth”.

Nicola Sturgeon said she hopes “this event will be the first of many…[because] there is much to gain from working with other countries”.

The governmental engagement in the project is underscored by the support of the OECD – Carrie Exton from their Statistics Directorate described WEGo as “a fantastic project”.

But beyond this, in the context of global divisions, dangerous populism, alienation, Katrin Jakobsdottir looks at WEGo and sees a “light in the darkness” – backed by Nicola Sturgeon who recognised that “if there is ever a right time for such an initiative, it is now…we should seize this [collaboration] with both hands: [this agenda] is the most important overarching thing in my government, because it affects everything”.

Hard to imagine a stronger endorsement for a project rich with potential. It might even be a game changer – setting a new tone for governmental cooperation, leadership, new norms in definitions of success, and working together to deal with the challenges facing today’s world.

Fuelled by coffee, working with such extraordinary and open minded leaders, WEAll might just achieve this wellbeing economy we so urgently need.

In one of the most artificial surroundings it is possible to imagine – a purpose-built conference zone near Incheon in South Korea – three thousand people gathered to explore the future of wellbeing. This was the 6th wellbeing forum hosted by the OECD’s statistics unit, a team that has been at the forefront of measuring quality of life for over a decade.

Discussions ranged from how data can help in the post-truth era to resilience and social protection. Nobel laureates, royalty, heads of international agencies joined with statisticians, civil servants, and academics to debate and learn from each other about the state of play in measurement and the implications for policy making.

And amongst it all, WEAll was making its presence felt.

WEAll was able to join the launch of the Wellbeing Economy Governments initiative. WEGo is something the WEAll team initiated (pre-dating the official formation of WEAll) and has been supporting for some time. Seeing it ‘go live’ was an important juncture for the wellbeing economy agenda and WEAll’s role in it.

WEGo is a partnership of national and regional governments, led by Scotland and joined by the likes of New Zealand and Iceland. It will promote sharing of expertise and best practice in designing an economy in service of collective. Its participants are civil servants and ministers who recognise that ‘development’ in the 21st century is a matter of delivering human and ecological wellbeing: wellbeing for people and planet.

The stated objectives of WEGo are:

The primary mechanism to advance these goals is a Policy Lab through which government officials will share relevant experience and expertise. Agenda items will include: protecting the natural world, addressing child poverty, undertaking wellbeing budgeting, utilising predictive analytics, and shaping government performance frameworks. In 2019 WEGo’s first Policy Lab will take place and an inaugural gathering of Senior Officials and Ministers from member states is planned to discuss progress in creating wellbeing economies.

Gary Gillespie, the Chief Economist for the Scottish Government, whose office is the secretariat for WEGo, described it as ‘bringing the economic lens back in’ to the wellbeing agenda. Bennedikt Arnason of the Icelandic government spoke of WEGo as the ‘ideal platform to contribute, to share and promote policy making for greater wellbeing’. Professor Joseph Stiglitz described WEGo as a ‘fascinating and important initiative of these governments: putting wellbeing into practice’.

Professor Stiglitz also spoke of the importance of persisting – and this has been the story of getting WEGo to where it is now. It has been a bumpy road as political changes altered governmental priorities (and government personnel). But while WEGo is still a small, fledging project, it has potential to shift the conversation about how economies are designed, how they work, and what they deliver. WEAll will be there cheering it on and helping input to its activities.

WEAll on the main stage

The conference also provided the chance to introduce WEAll into conversations about governance and whole-of-government policy frameworks – I moderated a session on the latter and joined a roundtable on the former and also spoke at an event hosted by the University of Melbourne exploring the importance of community participation in development of beyond-GDP indices and how to bring the lessons of these indices into political decision making. 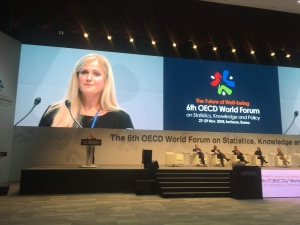 From Incheon into action

The OECD is playing an important role in upping the ante on wellbeing. In part by hosting these (massive!) global conferences every few years where the big names and rock stars of the wellbeing measurement movement join researchers and people working on translating the ideas and evidence into better government decisions. But, also by ensuring that the statistics and measurements are available, that the frameworks for thinking about operationalising the agenda are shared, and by reinforcing the importance of a broad-based understanding of wellbeing that takes account of people’s circumstances (including future generations), not simply how they report they are feeling.

This matters – the OECD is a large and influential agency. Its reports are read by governments, its assessments of respective country’s performance spurs debate, and its policy recommendations are keenly attended to. Many of the speeches and discussions at the conference wouldn’t have been unfamiliar in WEAll members’ calls. And that gives cause to hope that the momentum and drive to build a wellbeing economy is building in many quarters and (dare we hope?) heading into the mainstream.