A new WEAll Ideas paper has been published today, setting out what a wellbeing economy is in a variety of styles.

All the material contained in the short paper has emerged from conversations and discussions with people in the WEAll family and beyond. Much of it is synthesised from their reports, papers and vision documents. There are too many minds and ideas to acknowledge them all individually, but their work is vital in informing understanding of a wellbeing economy.

Download the paper “What is a wellbeing economy?” here

What are WEAll Ideas papers?

The Wellbeing Economy Alliance seeks to make the economy more humane and more sustainable. With over 100 affiliated groups across the world, we are as broad as the current model is narrow – diverse in our experience, expertise, focus, strategy, and our spheres of influence.

We agree that not only do we need to collaborate to have the impact we need – ‘togetherness above agreement’ – we also share a sense of what a wellbeing economy is. Different parts of the movement will emphasise different elements and add more details as their experience, knowledge, and focus allows – but they will do so from a common sense of what a wellbeing economy is all about.

The ‘WEAll Ideas: Little Summaries of Big Issues’ paper series is an attempt to share some of that sense in different formats that are useful for different audiences.

The content in this paper is drawn from the wellbeing economy community in its broadest sense. Our founding members contributed to the goals/fundamentals/building blocks – themselves drawing on processes of engagement, dialogue and discussion with their networks. People from all over the world have added to the Old Way Vs New Way matrix. And WEAll’s communications group has helped draft the everyday explanation.

In August, WEAll Ambassador Kristin Vala Ragnarsdottir brought together the WEAll Knowledge and Policy cluster with the PhD students close to finishing the pioneering AdaptEcon programme.

Following an intensive weekend of workshops, and training in media and public speaking, all participants had the opportunity to deliver and record a “TEDx-style” talk at the University of Iceland.

Below you can see all of the talks, which cover a range of topics from phosphorous to fish; from new stories to addiction. Each one is relevant to building a wellbeing economy and brings a unique perspective.

You can also visit the AdaptEcon YouTube channel which includes all the talks here.

What happens when you give away free money to strangers?

WEAll teamed up with our members the Post Growth Institute and Finance Watch to do just that.

On September 15, 2018, ten years to the day from the collapse of Lehman Brothers (which triggered the financial crash), a small group of us stood opposite the old Lehman Brothers building on 7th Avenue in New York, and dished out cash. 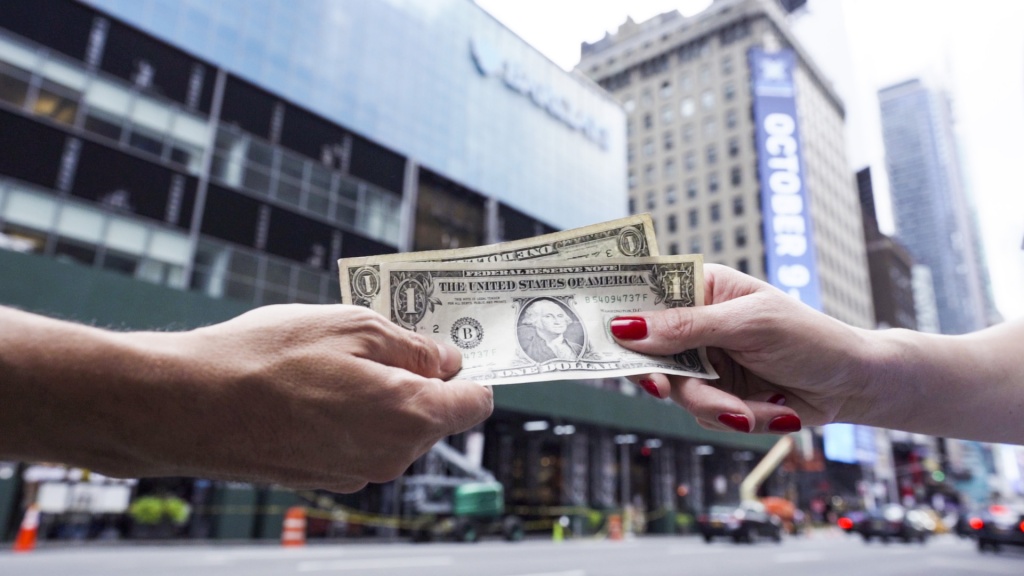 This stunt was part of the Change Finance coalition’s #10yearson campaign. The purpose was simple: to provoke people to think about our relationship with money and what the economy is for, encouraging sharing and collaboration instead of greed. To emphasize the point, we invited everyone to take two dollars – one to keep, and one to pass on to someone else.

In preparing for this stunt, I gave plenty of thought to our messages, the logistics, the risks – and not much thought to how people would react. In fact, I assumed that the $500 we had to give away would disappear within half an hour, with people grabbing bills as quickly as they could.

The reality was more complex, and it said a lot about our relationship with money: exactly what we were there to explore! At first, almost everyone was wary and confused, and many would not engage with us at all, refusing to believe anyone would just hand out money with no catch. 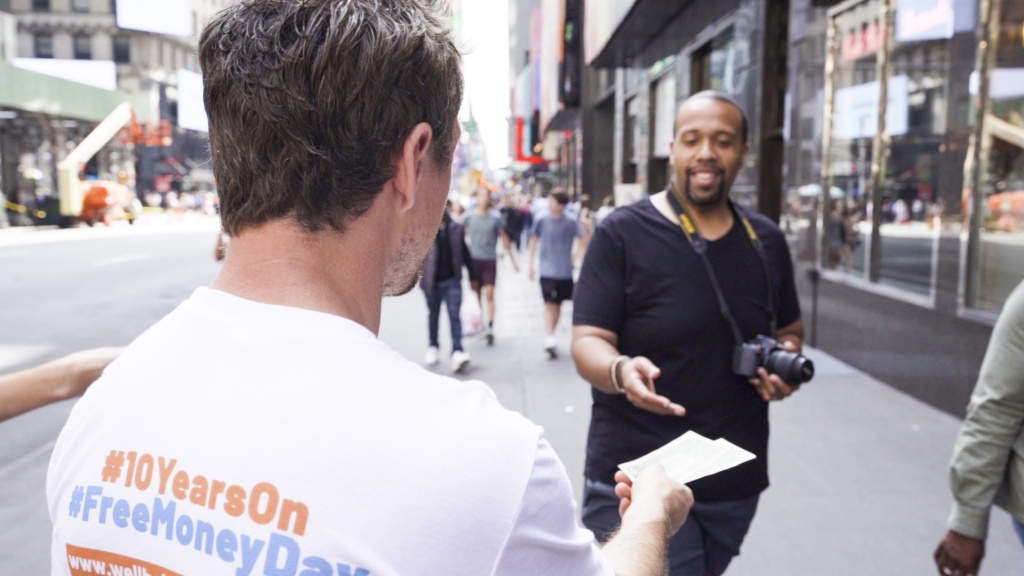 We didn’t get a lot of outright negativity, but a lot of people were quick to put up their hands and say, “I’ve got enough”. A nice sentiment, as our economy certainly needs a better concept of “enough”: it was pretty clear, though, that this response was defensive. People did not want to be seen to be in need.

Our pitch went along the lines of “It’s free money day! You get a dollar, and you pass one on to someone else”. The last part of the sentence was transformational. We could see the penny drop, as people who had been quickening their pace to avoid us suddenly smiled, slowed down and started to engage. The sharing element connected with people instantly, and that’s when they wanted to know more about what we were doing. 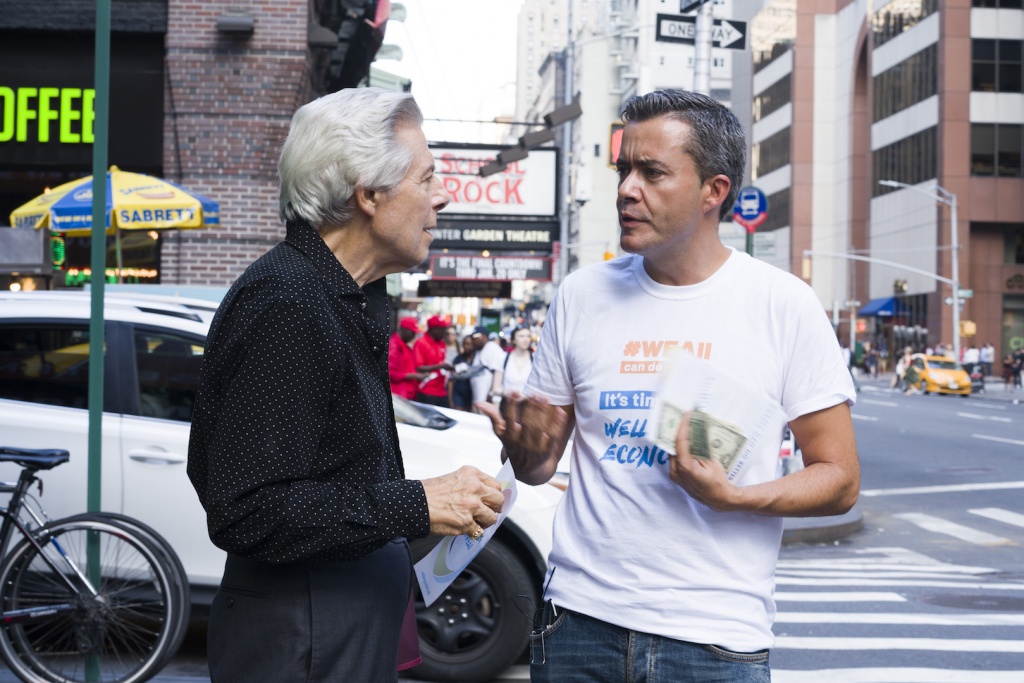 My favourite part was the people who really got into the spirit of it, eager to give away their dollar straight away – a few even joined our team for a while! Kids were particularly thrilled not just to get a buck but to hand out money to others. I lost count of the number of people who said we made their day.

It didn’t take half an hour to get rid of $500 on a Saturday afternoon in New York City. It took almost two hours. In those two hours, we had conversations with strangers lasting from a few seconds to fifteen or twenty minutes. We shared ideas, laughter and hugs with these strangers as we connected over the idea that we all can do better, and build an economy that works for people and planet. 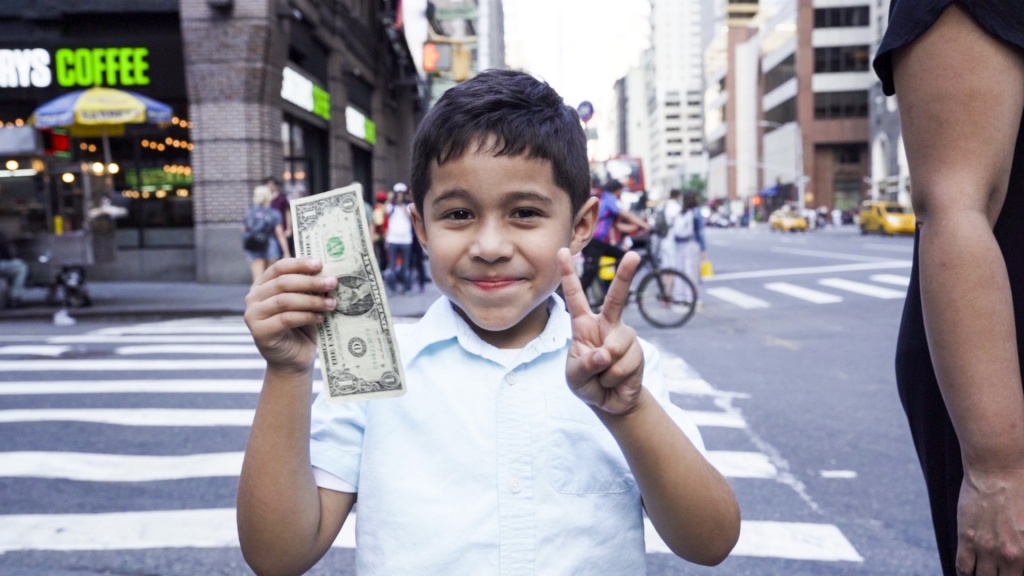 Images by Create The Remarkable

Wondering what WEAll is all about, and what we’re hoping to achieve?

Amp team members Katherine and Lisa wrote a piece for the Transforming Capitalism Lab, part of our member The Presencing Institute.

Read it here and join the discussion.

I was thrilled to be part of the international Rethinking Economics summer gathering earlier in August.

Rethinking Economics (RE) is an international network of students, academics and professionals aiming to build better economics education and thus contribute to transformation of the economic system.  RE is a WEAll member and we headed to their gathering to explain what WEAll is doing and our vision, and make connections between the work of RE and the wider movement.

This was a really special event – by the time I arrived on day 4, the participants were clearly a really tight group. Despite having already had four intense days of strategic planning and plotting to change the world, energy and enthusiasm levels were through the roof. I reckon there are a few world changers in this group!

I supported Rowan from RE to run the opening session on day five, encouraging students to work in their national or regional groups to use power mapping tools. They each mapped out the different external stakeholders who have influence over their university curriculum and came up with strategies for working with at least one of these to create change in the new semester. The depth of strategic thinking was really impressive for a short session!

Then it was time to deliver a presentation on what WEAll is all about and I was delighted to have a packed room full of people curious to learn about us. I started by asking everyone to say what they think a wellbeing economy is or includes, and the answers were brilliant – all completely in line with WEAll’s definitions! (see the photo) It was great to get an overwhelmingly positive response to my short workshop, and a wee queue of students keen to discuss collaboration at the end.

Myself and the other presenters were swept up in the busy afternoon of workshops, and I had so much fun as part of Team Meme Machine creating memes that RE can use during the #10yearson campaign (watch this space). We were also grateful to be welcomed into the brilliant (late night!) closing party, complete with quiz and talent show. These Rethinkers know how to have fun.

It seemed there was a meaningful connection with WEAll to be made with every Rethinking Economics group, and the other presenters I spoke with to – being part of this incredible Gathering made me more sure than ever that WEAll as an alliance to connect the wellbeing economy movement is really needed. It also gave me a real boost that with the energy and talent that already exists within the movement, we really can succeed in our ambitious goals.