The government of Canberra in Australia has introduced a new 12-point wellbeing framework in order to “make Canberra an even more liveable city where our entire community can thrive.”

This encouraging step towards building a wellbeing economy is based on a broad understanding of wellbeing. The official government website act.gov.au/wellbeing explains the plans as follows:

“Definitions of wellbeing are typically broad and diverse, encompassing a wide range of areas that impact on an individual’s quality of life. Generally, having the opportunity and ability to lead lives of personal and community value – with qualities such as good health, time to enjoy the things in life that matter, in an environment that promotes personal growth – are at the heart of wellbeing.

When talking about individual wellbeing, we often speak to a person’s physical and mental health, the strength of connections they share with people around them, or their financial position. More expansive indicators of wellbeing can be a person’s relationship to their surroundings, such as their safety, their capacity to enjoy and live in harmony with the natural and built environment, or their ability to be mobile in their community. These aspects of wellbeing are not independent of each other. They operate together and influence one another, creating complex relationships that are in turn shaped by an individual’s lived experience.

Our vitality as a city is the result of the various lived experiences across the community. Ultimately, feeling healthy and happy will mean different things to different people. Capturing all these aspects of a person’s lived experience can be inherently complex. Before attempting to measure the wellbeing of our community, we have spoken with and heard from thousands of Canberrans about what they feel is most important to their own, their family’s, and their community’s quality of life.” 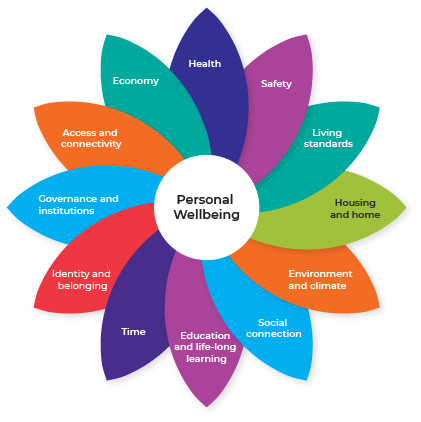 Find out more on the ACT government website here.

Back in the 1800s, scholars in the field of economics cast an envious glance at their colleagues in science.

They envied physics, with its laws of gravity. They looked with green-eyes at those studying chemistry, with its elements and atoms. And they longingly admired their biologist chums with their categorisations and evolutionary adaptation.

Now more than a century on, as we begin the third decade of the third millennium, economics no longer seems to take heed of science, let alone defer to scientific realities.

It is (invariably mainstream) economists with their contentions and blind spots that drive so much policy making, not scientists with their evidence-based models and forecasts.

The tables have well and truly turned. And nowhere is this so sorely – and painfully – acute as in Australia in the summer of 2019 and 2020.

Bushfires rage across the country, fuelled by record heat, and are now surging through acres of parched land dryer than ever after the worst drought in a generation.

In response, the Australian Prime Minister has held fast to a vision that a growing economy is the only option. He told a national TV station that “What we won’t do is engage in reckless and job-destroying and economy-crunching [green] targets which are being sought”.

What Morrison is effectively asserting is that the economy matters more than the science – in fact, that a certain model of the economy matters more, one in which the sole purpose of the environment is as an input to production and where it is assumed that growth will translate to benefits for all. This positions the economy at the top of the food chain, dropping crumbs to communities and extracting from the planet rather than something that is dependent on society which operates as a sub-set of the natural world.

Believing that the economy’s pre-eminence warrants downplaying all other concerns is a mindset that dismisses reams of scientific evidence and warnings. It turns a blinkered eye to why communities are being told to take shelter on beaches, why the Australian Navy is being brought in to rescue them and why a toddler was given a medal to posthumously honour his firefighter father who was killed with two other volunteer ‘firies’ (as us Aussies affectionately term them) when a tree fell on their vehicle.

What is happening in Australia is unprecedented.

It is what scientists have warned would happen.

It is going to be the new normal.

Perhaps most importantly, it is the loudest wake up call mother nature could send humanity to tell us that the wounds we have inflicted on her are taking an untenable toll.

Many times in the past I have heard those advocating for a new economic model say that when a ‘crisis’ comes, the movement for a more humane economy needs to be ready with ideas and visions, as that is when these ideas will finally get traction. That tactic always jarred – it seemed a rather privileged perspective that ignored or discounted that for many years many people around the world have already been suffering from the impacts of an economic model that treated people and planet as inputs to production. But, admittedly, such ostensible lack of solidarity or empathy may have come with some real politik. It recognises – perhaps implicitly – power imbalances.

And many of those impacted by the Australian fires are powerful. Many are wealthy. Many are people who have benefited from the growth-ist economic model because they are perched at the top of the pile. The coast houses of bankers, doctors, and property developers have been destroyed. New Year’s Eve parties have been moved from balconies with their harbour views indoors to escape the smoke. Corporate sponsored cricket matches have been called off because visibility got too bad. Yes, these are the folk with the resources to cope and recover, but maybe they’ll help nudge the balance of the conversation.

While Australia continues to burn, we can hope that what most Australians have been recognising will finally be heeded: that this monstrous cry for help from the planet is what flips back the agenda, so that economics returns to its deference to, and awe of, science. That scientific and natural laws will trump dubious dreams of trickle down. That now that wealthy and powerful people are also being hit by nature’s fury, they will join the ranks of frontline communities around the world and lend their voices and resources to mobilising for the transition that countries like Australia need to make towards an economy that respects the planet and priorities social justice and a healthy environment.

Building this new economic model doesn’t need to be disruptive – it can and must be just. There are ways and resources to protect livelihoods and, even better, to ensure that those most shafted by the current economic model are first served. But no longer can it be dismissed as ‘reckless’ to protect one sector – coal – at the cost of so many houses, lungs, biodiversity and precious wildlife.

Here’s hoping that 2020 is the year that new alliances come together to recognise that this crisis is one that hurts us all, and that a more humane economy that is gentler on the planet is one that will be good for everyone.

During her recent book tour around Australia, WEAll Knowledge and Policy lead Katherine Trebeck participated in a panel event in Perth.

The discussion was recorded and recently released as a podcast by Perth-based RegenNarration.

The episode – ‘Arriving at a Wellbeing Economy’ – is described as follows:

“Recorded live in conversation with a full room at The Platform in Perth, a few days after the global climate strike and as the UN Climate Action Summit began. This event launched Katherine’s book, as part of a national tour around Australia in collaboration with the New Economy Network Australia.

While everyday economics has assumed all growth is good, the richest countries already have plenty of wealth and resources — they have ‘arrived’. The Economics of Arrival urges us to move from enlarging the economy to improving it, exploring the benefits this could bring for all, and how it can be done.

Importantly in this context, Aboriginal people in this country might well ask when they’ll have the opportunity to ‘arrive’. And with all we continue to learn about the sophistication of Aboriginal culture in Australia throughout millennia, what other narratives of ‘progress’ and development are available for us to share in?

Hot on the heels of the Wellbeing Budget in New Zealand, just the latest in a raft of key developments around the world, we explore how we change systems, stories and measures, to transition to an economy geared towards shared quality of life, rather than sheer quantity of stuff.”

Listen below and check out the original podcast page here.

WEAll Knowledge and Policy Lead Katherine Trebeck features in the latest episode of Policy Forum Pod, created by the Asia and Pacific Policy Society. She discusses the need for a wellbeing economy, her latest book ‘The Economics of Arrival’ (co-authored with Jeremy Williams), and what could be done differently by governments and society as a whole to deliver good lives.